The southwestern rim of Lake Pontchartrain, commonly referred to as the German Coast, is a composite of landscapes both real and imagined, their details spread across plat maps, sunken concrete, and digital artifacts. The landscape of today is a broken swamp, like many others in South Louisiana. The cypress of Maurepas has been heavily lumbered, leaving strange radial patterns etched into the earth where the trees were felled. The once robust bottomlands of Labranche were similarly gouged in order to construct the Interstate 10 highrise that passes from Kenner to LaPlace. These channels have introduced saltwater, and a familiar process of erosion has played out across the region.

One of these developers, the Walker Land Company, sold many parcels in an unimproved stretch of cypress swamp they designated the “LaBranche Industrial Park.” Soon after, the company was under investigation by the U.S. Secretary of Housing and Urban Development (HUD) for withholding certain particulars of the development before selling the properties, such as omitting major details in the property report to HUD, including plans for the construction of a marina, boat-town, golf course, tennis courts, motel, and regional shopping center—all promised in advertising. They were also cited for failing to address who would be responsible for draining lots below sea level, as well as neglecting to detail how access to these lots would be achieved, since there weren’t any streets or roads. In the 1970s, as residential demand in St. Charles Parish increased, private real estate developers envisioned an opulent lakeside suburb that would bury this denuded wetland, complete with tennis courts, shopping malls, and broad tree-lined boulevards. They began purchasing tracts of land deep in LaBranche, with a belief that the Army Corps of Engineers would build a hurricane protection levee along the shore of Lake Pontchartrain, thus making their properties eligible for federally subsidized flood insurance. 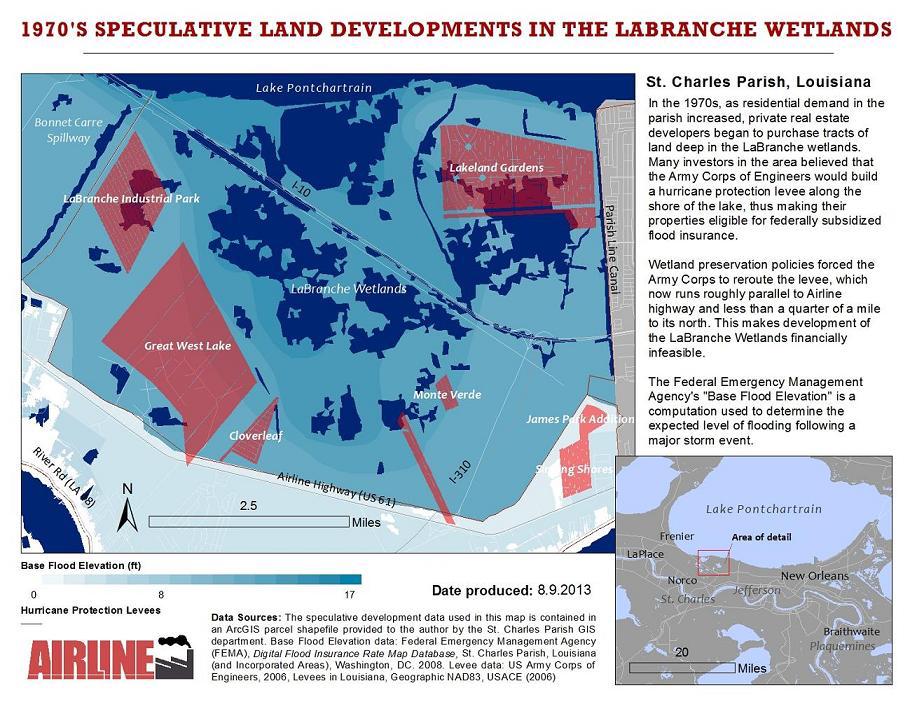 Ultimately, wetland preservation policies forced the Army Corps to reroute the levee, which now runs roughly parallel to Airline Highway, less than a quarter of a mile north of the road. This has made development of the wetlands financially infeasible. Individuals who bought property from the Walker Land Company and other developers now own parcels that are submerged beneath as much as 15 feet of water.

END_OF_DOCUMENT_TOKEN_TO_BE_REPLACED

Third installment of ‘Bummer,’ a series of short films vaguely about punk expatriotism and killing friends.

This HTML5 video may not appear on all browsers and devices.

This HTML5 video may not appear on all browsers and devices.

Longtime St. John Parish resident Donald Tregre discusses the parallels between the West Indian Hurricane (1915) and Hurricane Isaac (2012). Most footage was filmed in the parishes of St. John, St. Charles, and Plaquemines at or near the time of Hurricane Isaac.

This site’s on hiatus!

The game’s taken over for now. Check norcogame.com for the latest.